Having spent all Sunday afternoon composing Monday Meditation: Relax with these Raw Tiger Nut, Cacao & Coconut Treats , I realised I hadn’t given a thought as to what I was going to have for dinner and my husband had pre-empted me by getting some of his frozen curry from the freezer. I stood in the kitchen gazing at the contents of the fridge, opening and closing cupboard doors. It was growing late, I was hungry and thought I’d end up making a salad. However, I knew that when I smelled my husband’s curry, I’d wish I had done something similar. I didn’t really want brown rice and there was a lovely caulifower calling out to me, so I decided on spicy cauliflower rice.

I put some puy lentils to soak while I got everything ready – you don’t have to soak them, but it makes them easier to digest.

I decided on cumin, which I love, to flavour the cauliflower ‘rice’, and turmeric, both for it’s anti-inflammatory properties and the lovely colour it would produce. Digestion begins with the eyes and I like to make food as colourful and appetising to the eyes as the mouth. The beetroot makes the carrot hold its colour and adding the frozen veg at the end makes this a bright, colourful dish.

This takes about an hour from start to finish – it sounds complicated written out, but if you pre-cook the lentils and process the cauli before you begin cooking, you don’t have to balance so many items at once. It really is easy.

It made enough for 2, with a little mixed veg and lentils left over for next day (see later).

All quantities are very approximate

Rinse and soak the lentils, then drain and cover with water, cook beforehand or while preparing the veg. Don’t overcook as they will be reheated in the veg mix. You want them to keep their shape and not become mushy.

Process the cauliflower florets for a few seconds until it looks like rice and set aside.

Melt a little coconut oil in a frying pan, stirfry first the onions, then the other veg for a little while with some black pepper, add a few spoons of the lentil cooking water, cover and cook on a low heat. Make sure it doesn’t dry out.

When almost done, sprinkle on a heaped teaspoon of  vegetable bouillon powder and mix in, adding the peas and sweetcorn and a little more lentil water. Cover.

Meanwhile, heat a little coconut oil in another frying pan, add the cumin and turmeric, stir round and add the cauliflower rice. Mix well, stirring and turning it over all the time. Add some black pepper and a couple of spoons of lentil water to keep moist.

On this occasion I didn’t add dried apricots to the rice as my husband doesn’t like apricots, but when he tried some ‘rice’, he surprised me with ‘it would be nice with apricots!’

When the ‘rice’ is ready, with as much or as little bite as you prefer, add several spoons of lentils to the veg and gently mix well, making sure they are heated through without overcooking everything. Spoon the ‘rice’ onto a plate with the mixed veg on top.

I forgot to add the pine nuts and ground almonds with nutritional yeast and cayenne before I took the photo of the cauliflower rice dish, but I added them when I had the leftovers next day accompanied with sweet potato mashed with almond butter, and some steamed broccoli. 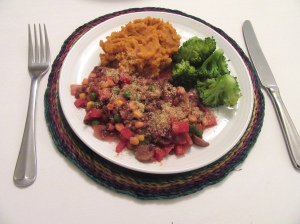 The cauliflower rice dish was really good and tasty, even my sceptical husband had a small helping in addition to his own curry!

These meals have so many vitamins and minerals, different complementary proteins and healthy fats, and are very satisfying.