I have waited 30 years to see Wroxeter. Today, I finally made it.

On our first trip to look for a house when my husband was being transferred across country, I noticed one of those English Heritage signs saying Wroxeter Roman Ruins, or something like that. I made a mental note.

I love ruins. I love old churches, abbeys, castles. I love the ever-presence of past inhabitants. I love imagining their lives. I am overwhelmed by the fact that I am walking in their footsteps, I marvel at the magnificence and complexities of the buildings and wonder time after time how they managed it. In many instances, the architects didn’t even get to see their project finished.

We were among the first visitors to the Yorvik Viking Museum in York, when it was still an excavation site, and they allowed a few people at a time to walk along the viewing platform to watch them work. This experience sparked an historical interest in our children that they are passing on to their children. They love ruined castles. I have lost count of the number of shields and medieval weapons we’ve constructed over the years and the gory battles that have been reenacted. Such places are examples of living history which absorb children’s attention so they don’t realise they are learning while playing.

Ruins are generally situated in such beautiful settings that it can take your breath away. They are so peaceful. There’s no rush, you can just sit and contemplate for as long as you wish, and now that we are unaccompanied, that’s just what we did. 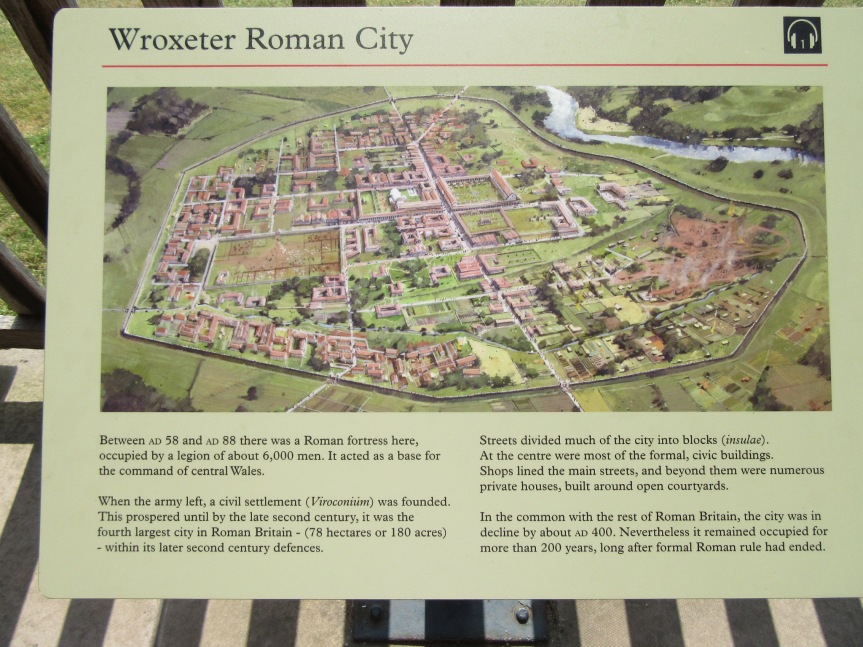 Wroxeter – or Viriconium – was a first century AD Roman city in Shropshire, the fourth largest town in Roman Britain.  Watling Street (the long, straight Roman road that goes across England from south-east to north-west) cuts through the middle heading south. It is surrounded by fields of sheep, there is a Roman vineyard nearby, an Anglo-Saxon church and in the distance you can see Long Mynd in the Shropshire Hills.

Today was a rare (this summer) beautifully warm sunny day with clear blue skies. It was a day calling for an outing. I decided today was going to be the day. It has taken this long for my husband to get on board with my passion for historical sites. That’s why it’s taken so long. He has always hated wandering around anywhere on foot – but especially old buildings –  preferring to be speeding along on two wheels or puttering along in his Morris Minor. However, since he was forced off the bike by an accident and had to do walking therapy, he has become more amenable to my suggestions.

Here are some photos of the site.

(If you’re reading this via email, you’ll need to click onto the blog).

They show the main excavation of the large public baths, the market hall and forum – the tiled stacks in the middle supported the floors of the bathing rooms (at the end of the  bathing rooms there are the remains of the furnace that heated under the floors and walls of the baths – they had their own underfloor central heating!); the drainage ditch for the latrines; a baby housemartin in a nest in the eves of a blocked off farm building and several more nests below; the reconstructed Roman town house (built by 6 builders in 2010 for the TV programme ‘Rome Wasn’t Built in a Day’ using tools, materials and methods available in Roman times where possible); in front of it you can see the remains of the colonnade of the forum and behind it, the furnace that heated the bathing rooms. Oh, and a few sheep who seemed to be plotting their Great Escape ‘over here by the wire!’

There’s a small museum and the inevitable gift shop on the site, and plenty of benches to perch and take in the stunning views.

I hope you enjoyed our rare day out. I loved every minute of it! Oh, and I have pink knees from the unaccustomed sun.

9 thoughts on “Wroxeter – A Roman City on A Beautiful Summer’s Day.”