The other day a momentous event happened:

I went to a local café.

To put this in perspective, let me sketch in some background details. Bear with me, it’s worth it.

I haven’t been to a café for 29 years. That’s no typo. The last time I went to a café or restaurant or anywhere that sells food to eat on the premises, was the evening of the day we moved across country to our present house.

It was an horrendous two days of travelling, I was in a monumental amount of pain having just injured an already seriously injured back a few minutes before getting into the car. We were all tense. I was moaning in the front seat, Mum was worrying and feeling carsick in the back, the kids were confused and apprehensive and concerned about me. My husband was doing his best to concentrate on the driving and not get lost. (We do tend to get lost, a lot).

We had an equally horrendous first night at a hotel. We had requested a room with a firm mattress for me, it was anything but.  Our daughter was completely unsettled and spent the night wandering between their room and ours (on the next corridor),  with her exhausted older brother in tow. It was one of the longest and most uncomfortable nights of my life, spent part-time in her bed, part-time on the floor, part-time in ours, and no-one getting any sleep.

Next day, moving-in day, we had to sit in the drive of our new house for several hours waiting for the removal van to turn up and bring us some furniture to sit (and in my case lie) on. I wanted to scream and scream and scream with the pain. (Mum meanwhile was happily filling in the neighbours about our family history over the garden fence!)

When we were finally in, it was early evening. Mum kindly offered to buy us dinner, but wanted us to go to a local restaurant. I had assumed it would be fish and chips out of the paper.  However, she wanted to treat us in an effort to erase the horrible time we’d had. I couldn’t face it, but I didn’t want to disappoint her or the kids who rarely had such an opportunity to eat out. It was the only way I was going to get any food and I was feeling light-headed. Even takeaway was too much for us all to face as it meant trying to find plates and cutlery, washing them etc. So we agreed.

It was a small, homely restaurant with just a few tables and a tiny reception area. The seats were totally unsuitable for me in my state, even padded around with cushions for support. (I am feeling every painful moment of this story as I write, it’s not one I usually like to recall).

We waited, and waited. The staff were very apologetic, fully aware that something was going on besides kids getting ravenous and all of us about to begin gnawing on a chair leg. They called us through, just as I was about to throw in the towel.

The plates and portions were enormous. There was no way I was going to sit through all that. I felt sick with pain and knew that if I let go of the chair and table that were providing support, in order to use the cutlery, I was done for. My husband tried cutting up the food for me.

I had one mouthful and had to give in. We asked Mum to stay with the kids and my husband took me home, put me to bed and dosed me up with painkillers before returning to the restaurant. To this day, I don’t know if they saved his meal or if the kids ate theirs. I passed out in bed and have never been in an eating establishment since.

So, you see why my visit to the local café was such an adventure.

My husband had often spoken about this café in a lake setting where he and his cycling friends stop off for tea and toast during their bike rides. He kept wanting to take me, just for some fresh air and a change in scenery. I was sceptical that the seats would be suitable (they never are), but this particular day, I felt adventurous, it was a fine if slightly chilly day and I decided to go just so my husband could show me what he’d been describing and the subject would be closed. We would have a cup of tea – herbal in my case, he had made sure they sold it – admire the view and come home.

When we arrived, there was only one other couple there and we had the choice of sitting inside or out. The inside chairs were no good for me, but the outside wicker ones looked more promising so we chose a table outside and once I was installed with my ever-present support cushions, I looked around and let out a breath that I didn’t even realise I’d been holding on to.

It was a stunning setting, with a huge lake, trees, fields, housemartins. The lady who served us was friendly and helpful. I had done a quick scan of the meals chalked on the board and soon confirmed there was nothing vegan and gluten-free available. This was where fishermen and cyclists came for toasted bacon sandwiches in the mornings, in the heart of farming country. There were the usual lasagne, jacket potatoes with tuna and cheese, fish and chips and so on.

We ordered tea, my husband had his usual strong brew and I had green with jasmine. I was surprised he didn’t order a scone or cake to go with it. I looked at the menu she had given me; no, there definitely weren’t any vegan snacks, I was beginning to feel hungry and realised I hadn’t had lunch, but I encouraged him to have a scone if he wanted one. He checked with the lady that there weren’t any vegan options and surprisingly, after asking if I ate eggs (!) she said they had chilli that was vegan.

I was more than a little surprised and very sceptical. We questioned her further. Something about the fact she kept switching between vegetarian and vegan made me a little wary. But she was so keen to find me something as, by this time, I was becoming a little light-headed and all those memories came flooding back.

She offered salad, rice, jacket potato and tortilla chips as options to accompany the chilli. She checked the ingredients on the tortilla chips and on the balsamic salad dressing. I was getting caught up in the thrill of it all and as my husband had agreed to the scone I decided to go for it. I was out, I was in a café after all this time, surrounded by breathtaking scenery, it was a lovely afternoon and I wanted to make the most of it. I chose the chilli, salad and tortilla chips.

As we drank our tea and waited for the food, some moorhens came out to play and entertained us chasing around on the grass. 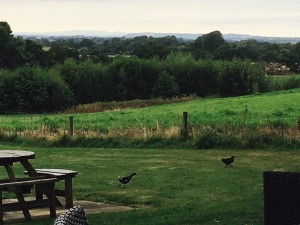 The food arrived and it looked good. I couldn’t believe this was all happening. I was really enjoying myself, and my husband couldn’t believe he’d got away with bringing me out to one of his many cycling stops and we were actually having an enjoyable afternoon out.

I tentatively tasted the chilli, my husband warned me it may be a bit too spicy for me, it was, but it was good. Then I noticed the textured bits and I was a bit flummoxed, but I was sure it must be some kind of textured vegetable protein. My husband checked with the waitress, she concurred and told us not to worry, she was vegetarian and she understood. She said it was quorn.

Now I had read recently that Quorn were introducing vegan products into their range after a lot of consumer pressure (they had already gone gluten-free). I trusted that this was one of them. A little voice in my head was trying to get my attention. But I trusted her, she had checked and I didn’t want to spoil this celebratory occasion or ruin my husband’s friendly relationship with her and make it awkward for him to go there again with his friends.

As the skies darkened and rain threatened, we called it a day and headed home. I couldn’t wait to tell my family what just happened. I put pictures on Instagram of my vegan chilli. My son commented ‘Fab!’ (He’s a man of few words). Then, ‘How was the chilli?’ ‘Fab,’ I replied, picking up his (relatively) youthful parlance (although I hesitate to describe his appropriation of a sixties expression as youthful, but we’ll let that pass).

Then I remembered and decided to Google quorn.

Yes, 3 of their products are indeed now vegan. My quorn mince isn’t one of them.

There is a difference between vegetarian and vegan.

My chilli was gluten-free. It was also vegetarian.

17 thoughts on “Chillin’ on a Chilly Afternoon with Chilli”