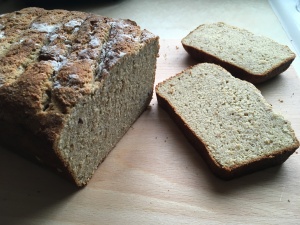 This is the second post describing our quest for a moist, tasty gluten-free loaf that doesn’t sound like a lab experiment or dry out and break up after the first day. If you’d like to read the original post first, click here.

I rarely eat bread and I rarely miss it, but just ocasionally I get a craving for it. I buy some new product that maintains it isn’t like any other gluten-free bread, costs the earth and inevitably it is such a disappointing experience, I go back to being bread-free. On Sunday, we decided to have another go at making a tiger nut loaf.

We have been using BBC Food’s Dan Leopard’s recipe as a guide but mixing up the flours for more flavour and nutritional content. Which flours we used tended to be those we had in at the time.

In our previous, second, attempt, we only used 1 oz of Tiger Nut Flour as the original had a much larger amount and had been a little too grainy. We also decreased the amount of water from the first loaf which spread too much.

This time, we used the much finer Tiger Nut Powder from The Tiger Nut Company (they ship overseas) and made it the main ingredient – by accident as it turned out since my husband thought we were out of cornflour but of course I later found it on a different shelf at the back of the cupboard, as you do! We substituted the cornflour with gluten-free self-raising flour bought for another recipe. As it happened, it was a lucky accident, because this loaf turned out to be the best yet.

We also decided to bake it in a loaf tin this time to stop it spreading so much and produce a deeper loaf.

It turned out to be tasty, firm, moist and still fresh the next day. And the next.

We sliced it up and put half in the freezer while a third was wrapped and kept in the bread box. On the third day, I got some out of the freezer to have with soup and to see how it had stored. Once thawed, it seemed just as fresh. No need to toast it.

I also tried a slice from the remainder of the loaf that had been wrapped and kept in the bread box. It too was still fresh enough to spread peanut butter on without having to toast it. This is a big deal in the world of gluten-free bread! You always end up having toast because it’s so dry.

It won’t resemble your average thin white sliced that you can make into sandwiches – homemade glutenfree bread is often the consistency of, say, a more dense madeira cake  – but I love it topped with yeast extract,  tahini, nut butter, avocado, banana, salad – or often a combination! We found it easy to spread and handle, it wasn’t as delicate as some gluten-free bread is.

This is such a nourishing, nutritious and satisfying loaf. It has so many good things in it, protein, calcium, healthy fats, fibre, probiotics and prebiotics, B vitamins – I could fill the page! And it doesn’t have anything artificial in it or need a chemistry degree to understand the label.

Here’s the new, improved recipe – watch out nearer Christmas when we hope to produce a fruity tiger nut loaf.

(All measurements are approximate, you may need to adjust to suit your own tastes or your oven).

1. Warm the linseeds on a tray for about 10-12 minutes, until they darken slightly (the toasted seeds will release a sticky gluten-like substance when mixed with the wet ingredients, and they give the loaf a wheatgerm-like flavour).

3. Mix together the water and yeast, then stir in the yogurt and seeds. Set aside.

5. Pour in the yeast mixture and olive oil and mix well until it resembles a smooth thin batter.

The liquid will turn into a sticky dough within a few minutes as the linseed, flours and psyllium husk powder become gel-like.

6. Once the mixture is firm enough, knead it for 10 seconds on the worktop to mix everything again, then place the dough back in the bowl, cover and leave in a warm but not hot place for 30 minutes.

7. Place the dough into a non-stick or lined 2lb loaf tin and brush with the extra olive oil, cover and leave it to rise for about 30-35 minutes.

9. Make some diagonal cuts across the dough with a sharp knife, sprinkle with a little cornflour and bake for about 40 minutes, or until rich golden-brown in colour.

10. Cool on a wire rack before slicing.

Here are the three loaves to compare: 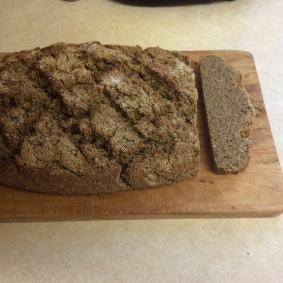 Latest on the left, second attempt in the middle and first on the right. The middle one was good, but I think the latest is the most successful.