I so wish this was scratch-and-sniff and I could fully share these beautiful sweetpeas wth you all! They have such a powerful scent, my husband’s allergies won’t allow him to be in the same room. But every year he grows me a pot full because they are my favourite flowers and they bloom in July, which is doubly significant as it is my birthday month and also the anniversary of the death of my younger brother, Dave, age 22, who also loved sweetpeas.

I have struggled for some time to find a way to mention him. We as a family find it difficult to talk about him, even after all these years. His death was so violent, so sudden and so incomprehensible. Far fom home. It is still too raw.

This month is so difficult because he died the day after Mum’s birthday, 5 days before my birthday and 7 days before my son’s second birthday, and in between all those dates we had to cope with a post-mortem, an inquest and a funeral. In fact, I learned of his death as I was getting my toddler son ready to attend his friend’s birthday party. I hid my tears as I operated the music for Pass the Parcel and Musical Chairs. Since then, we have added three more July birthdays, so this month is bitter sweet.

One of my other brothers and I have spoken about him in recent times, we have different perspectives as I was away from home in the latter years and there are huge gaps in my memories. However, Judith at Nature Knows Best published a post today that happened to be about grief and the colour of one’s kitchen (yes, really, pop over and read it), and it struck a chord – in particular because we are currently choosing the colour of our kitchen! I commented on her post and it seemed to open a way for me to publish my own post on this topic.

Dave was an artist, poet, lyricist, bongo player; he loved animals, nature programmes and being outside; he hated being cooped up. He worked intermittently, finding it difficult to fit in and adhere to another’s routine. He worked for the park’s department so he could be outside.

When we were young, people thought we were twins, there were only 13 months between us. We both looked like our dad: mousey hair, skinny, short-sighted. He was not in robust health through his short life. I remember him having Scarlet Fever and breathing problems. But he was so strong, he could easily beat me at arm wrestling and I still remember the Chinese burns!

Dave was a bit of a cuckoo and there are few photos of him past a certain age as he rarely seemed to be present for family photos. He was always off doing his own thing. The one below was given to me by my best friend, Denny, with whom he wrote many songs and whose guitar he decorated. Denny still uses it. It is well-worn now!

I cut some sweetpeas every year and bring them into the house for him. They are fragile, colourful and last only a short time, but they have a strong impact while they bloom and few are unaffected by their appearance. 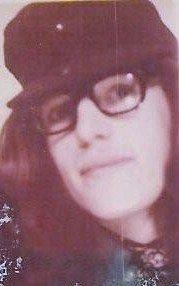