Turmeric is a member of the same family as ginger root and has many of the same health benefits. It contains iron, calcium, copper, potassium, B6, manganese and dietary fibre. It’s the spice that makes curry (and your fingers!) yellow and has been used in Indian cooking and Ayurvedic and Chinese medicine for thousands of years.

It’s active ingredient is Curcumin, which has powerful anti-inflammatory and antioxidant properties and many studies have shown it to be effective in natural treatments of Irritable Bowel Syndrome and Crohn’s Disease, for example. (Such treatments tend to use Curcumin extracts rather than turmeric on its own). 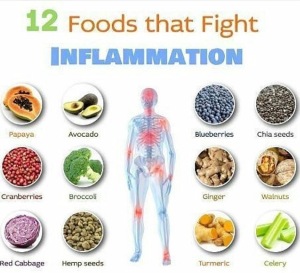 Current thinking holds that chronic low-level inflammation is responsible for many of the conditions prevalent in Western society: heart disease, Type 2 diabetes, cancer, Alzheimer’s and many degenerative conditions, including rheumatoid arthritis.

Curcumin has been found to fight inflammation at a molecular level and to be as effective as some prescribed medications, without having the nasty side-effects.

It is also believed that Curcumin may be effective in slowing and repairing brain-related diseases, such as depression, and age-related conditions, and there is much excitement that Curcumin may one day be an active ingredient in treating Alzheimer’s.

Some research has shown Curcumin to be effective at preventing, slowing and reducing some cancers in labs and animals and in one study of men with colon lesions, they were reduced by 40%. It seems it is particularly effective in preventing cancers of the digestive system and in treating bloating, indigestion and liver problems.

There is much research into the clinical benefits of Turmeric and Curcumin, several studies are at the trial stage.

Here is a great Anti-Inflammatory Juice Recipe I call Morning Glory, I have it every morning to help prevent and reduce the symptoms of colds and viruses, reduce mucus and joint inflammation.

If you feel the first signs of a cold, try drinking this juice 2 or 3 or more times a day.

I haven’t had any colds, coughs or asthma in the 3 (now 4) years I have been juicing.

(All ingredients are organic and therefore washed and the peel kept on. If using waxed non-organic lemon, thinly pare the peel, leaving as much pith as possible, this is where the micro-nutrients are).

2 cms (at least) Chunk of Ginger Root (depending how hot you like your juice, more if you’re hardcore or it’s a particularly thin root)

Juice the ginger, turmeric and lemon (and finally celery) between the apple and carrot.

Then add a Twist or Two of Black Pepper and stir.