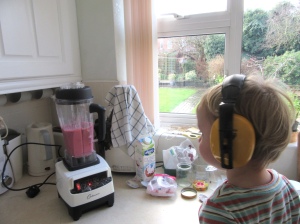 Two year old Frank watching his Berry Good Smoothie blending in the  Froothie Optimum, he has his own special ear defenders just for creating smoothies 😊 As soon a I mention making a smoothie he’s there like a shot, dragging the kitchen stool up to the counter, washing his hands and ready for action. Just like his dad at the same age, though he likes to make chilli-with-everything these days!

When cooking with Frank, I am always glad to have the opportunity of this time together, one on one: yes, it’s messy and yes, he can get a bit over-enthusiastic – I think we got about a third of a tub of baobab powder in there! – but I love watching him taking it all in, soaking up whatever I tell him and storing it away. I love his enthusiasm. I know that at some point in the future he will use it all and hopefully remember some of these times together.

He (and his older sister) have been cooking since they were literally babes in arms. They have always been willing to taste anything, and although they still go through the picky two-year-old stage, the fact that they have always been encouraged to be present in the kitchen and help with preparation means that they are familiar with cooking from scratch, using a wide variety of fresh foods.

They are already creating their own recipes: Frank’s four-year-old sister decided to try banana on her pizza and Frank likes the idea of dipping carrot sticks in strawberry spread! He loves homemade chips with balsamic vinegar and juices that contain ginger and turmeric. Olives and almonds are also favourites. The fact that actual vegetables are not allowed on his plate at the moment is irrelevant (except cucumber and raw carrot), he gets everything he needs in other forms* and is slowly acquiring the knowledge and skills to transform them into healthy meals when he does eventually give them house room. I have seen a photograph of Emily standing on a stool at the counter rolling pizza dough and chopping vegetables, and Frank sitting on the counter chopping cucumber! Children love to be involved in the kitchen and will be all the healthier – and self-sufficient – for it. Emily recently sliced a mushroom so thinly and precisely, with perfect control of the knife, just by copying her dad.

This is Frank’s smoothie recipe:

Large handful of frozen cherries, large handful frozen mixed berries, more than we wished for baobab powder, about 3 tablespoons oats plus what he spilled 😉 most of a medjool date minus a bite for tasting, a banana, a carefully tilted amount of cashews from the jar (with ‘help’ from Grandad), 2 tablespoons soya yogurt and a lot of coconut milk! It made enough for 3 of us and he had seconds and thirds, he said it was ‘berry good!’ Unfortunately, he doesn’t do washing up, our dishwasher is defunct (and so is my husband after a weekend without it!).

*Frank doesn’t eat vegetables – apart from raw carrot and cucumber – but he will have juices and smoothies, even green ones, so seeing him have so much fun in the kitchen leads us to hope that one day he will be as much of a foodie as his dad and grandma.