Recently, I was surprised and pleased to win a giveaway prize in a Nanabar* competition. They are the world’s first organic, gluten-free nicecream bar (ie vegan), which is opening in London. Justin, the owner, ran a fun campaign to raise awareness of the opening and put together this competition as the final push.

My prize couldn’t have been more apt: a Raw Island One Day Juice Cleanse.* I was so excited. I really needed to do this as part of my cleaning-up regime – I had let things slide in the ‘taking care of me’ department. I was stressed, overtired, not sleeping and had a lot more aches and pains than normal. My digestion was poor, I felt I had too much adrenaline and needed calming down.  (See Are You In Need of an E-Break? (I am). No-Phone Sundays, Anyone? and Taking a Break to Recharge Your Batteries Can Re-Energise & Re-Inspire (Slideshow Included))

A week-long juice cleanse usually sorts me out. This one was just for a day, so I prepared well in advance to gain the most benefit from it. I wanted to cleanse mind and soul as well as body.

In the 10 days before I received the juices, I was a woman on a mission. I took extra special care over what I ate and drank. I decluttered everything in sight, sorted out desk drawers, got up-to-date with paperwork. Even the garden was cleared of dead and dying flora (courtesy of my husband) and generally tidied up. I relaxed, meditated, contemplated, while my iPad and iPhone stayed off. 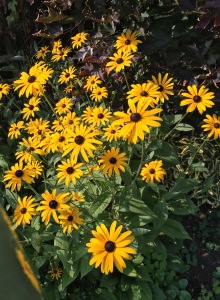 Raw Island is owned and run by sisters Sarah and Fiona Lewis. They are qualified nutritionists based in London and are only just beginning to extend their juice delivery nationwide. All my contact was with Sarah who is friendly, supportive and responded quickly to any questions I had.

Their website explains that they work on the principle that tropical fruits are better than predominantly green juices when doing a juice detoxification and their juices contain no fats or nut milks.

I was interested to see how the juices would be packed and how fresh they were; how long they would last; whether they would be large enough and substantial enough to keep hunger at bay. Would I like the taste or would they be too sweet?

The night before delivery, I made sure I went to bed early to get a good night’s rest. Of course, this didn’t happen! I felt like I was going to drop off but never quite made it – until a couple of hours before my husband got up. Not the start I hoped for. 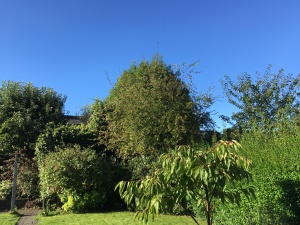 But it was a glorious morning! Clear blue skies and sun, I couldn’t have ordered a more perfect start to the day. I began my day with gratitude, then had a drink of warm water with ginger and lemon and began my preparation. I did some skin brushing with a dry loofah to improve circulation, remove dead skin cells and encourage the excretion of toxins before having a long hot shower with Dead Sea Spa Magik Shower Gel and used Dead Sea Spa Magik Mild Exfoliant on my face* (no microbeads, see my post Ditch the Plastic: Microbeads – What Are They Good For…?)

By the time I was dried and dressed, they had arrived. 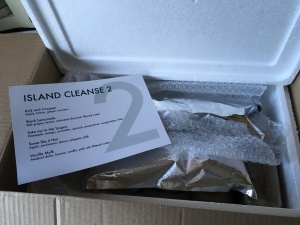 The five 500ml bottles were packed with frozen gel packs, wrapped in bubble wrap inside polystyrene and a cardboard box. They came by courier and the box was intact.

The juices come in reusable, recyclable, BPA-free plastic bottles, all numbered in the order in which they should be consumed. They needed to be used by next day as they are cold-pressed and despatched the day before delivery.

There are 2 Raw Island One Day Cleanses to choose from named 1 and 2. I chose 2, which is formulated to aid digestion, boost metabolism and support the immune system. I liked the sound of the exotic fruits and the spices.

Kick and Conquer, the first juice, and Some Like It Hot, the fourth one, were aptly named! Wow! I have ginger and turmeric every morning but Kick and Conquer was very spicy and lemony. I loved it. Some Like It Hot nearly took my head off! It has jalapeno chilli in it, which I’ve never had. When I took the first sip, I could hardly swallow it. I thought I wasn’t going to manage it. But I really wanted to complete the cleanse and I took my time, sipped slowly and gradually became used to it. I loved it. 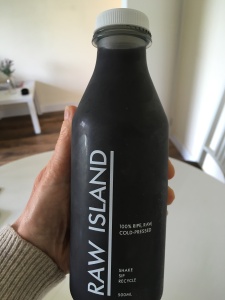 In between, there was Black Lemonade made with Red Grapes, lemon and activated charcoal – used to remove ingested poisons and chemicals in hospitals but in this instance to remove toxins. It binds to the chemicals etc and flushes them out of the system.

Take Me To The Tropics includes tropical fruit like pineapple, mango and passionfruit as well as cucumber and spinach. Again, it was very tasty and refreshing.

All the juices were extremely flavourful, zesty and zingy – except the Vanilla Mylk which was made with medjool dates, sweet and a lovely contrast to finish with – especially after the chilli! Tart and spicy are my favourite tastes, so these were perfect for me.

The juices were more than ample, in fact I had trouble fitting them all in – I started quite late in the morning and had to stay up later than planned to fit in the fourth. I saved the Vanilla Mylk for next day. I wasn’t hungry for a second.

Would I do it again? Most definitely. I felt fantastic afterwards. No headaches – I kept well-hydrated – I slept better, felt re-energised, my eyes and skin regained their shine, I was calm and positive. Best of all, the main aspect for me when I do a juice cleanse is that the pressure and pain in my lower spine is reduced, and I found that happened even with one day of juice only.

I wanted to prolong the benefits, so next day I continued to juice but in between, as recommended, I had some watermelon to reintroduce fibre and keep hydrated, and made a smoothie with papaya – recipe coming soon. This is the end of my third day after juicing and I have had juices, a salad and home-made hummus, and some live coconut yogurt. Tomorrow I will have my first cooked meal, probably a stir-fry or maybe some soup.

Doing a juice cleanse resets your hormones, your taste buds and your desire for high carb fatty processed or sweet foods. It gives your digestion a break, nourishes your body on a cellular level and enables it to rest and repair. This is my experience, if you have never done a juice-only program before, please check with your doctor first.

Thank you to Sarah and Fiona for giving me this opportunity to try their One Day Juice Cleanse and to Justin for organising the competition. I enjoyed it immensely, it was just what I needed!

At the time of writing, the company are offering a 10% discount off your first order when you subscribe to their newletter.

Believe it or not, these are the grounds of our National Sports Centre at Lilleshall where Olympian gymnasts and archers, and professional footballers train. Not a bad place to work and train, eh?

It’s in a beautiful setting, I love the trees, especially this majestic cedar tree. It is stunning close up and the glade that it forms with the tall pines is home to lots of squirrels, rabbits, birds, pheasant and the odd fox and badger. We have brought friends and family, young and not so young, here to enjoy the peaceful surroundings in all seasons, even on Boxing Day!

The estate was originally in the demesne of Lilleshall Abbey but fell into private ownership during Henry VIII’s dissolution of the monastries. For part of its history it was owned by the Dukes of Sutherland and the second duke’s wife played a large part in the architectural design and landscaping of the estate.

In 1949, The Central Council Of Physical Recreation bought the hall and several thousand acres of land and it has been used as a sports centre ever since. The future Queen Elizabeth II opened it in 1951. The entrance gates are replicas of those at Buckingham Palace.

The England football team trained there for two weeks before the 1966 World Cup – the fresh air and stunning views obviously did the trick!

I thought I would share a few photos from our recent visit. 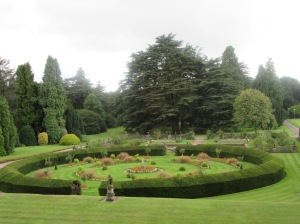 The view from the terrace

These water lillies looked like they were really enjoying the sun 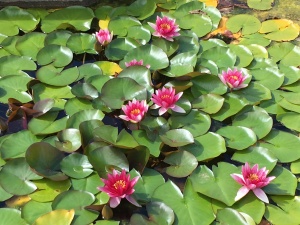 These are grapevines growing over the path 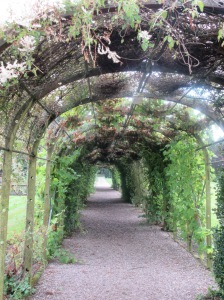 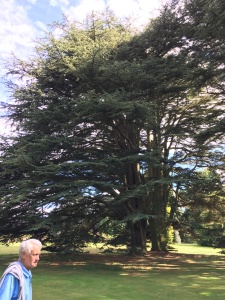 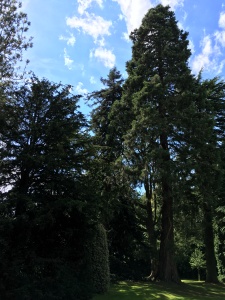 There are several follies around the grounds. 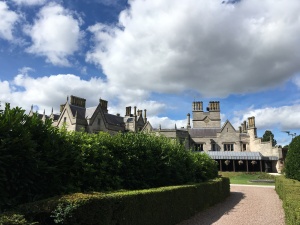 Count the chimneys – we got to at least 40! Imagine having to light all those fires and clean them after, not to mention the chimneys themselves. This is the side of the hall. 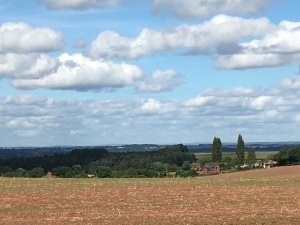 At the far end of the estate there is a pet cemetery, one area for dogs, one for cats, some have their own headstones, some share them with others; there is even a memorial to a Russian wolfhound called Czar, who was given to the Marchioness of Stafford by Czar Alexander II in 1836 and lies buried alongside – but a little apart from – the other dogs and cats, as befits his aristocratic status! 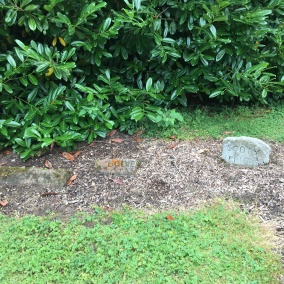 I tried to take some video of our walk through the trees for a friend who could do with some sunny smiles, but finished up with a lot of footage of feet and pink knees! Apparently when I thought I was recording, I was in fact on pause and vice versa. Unfortunately when we tried to rectify this on a second visit, the rain came down and it doesn’t show the grounds at their best. Because we’d had storms in-between, the ground was too wet to retrace our steps (there used to be a canal system running through the estate, built to transport coal and limestone to and from local mines, and parts of it are very marshy, even in the summer). So I present to you some photos of sheep in a neighbouring field! 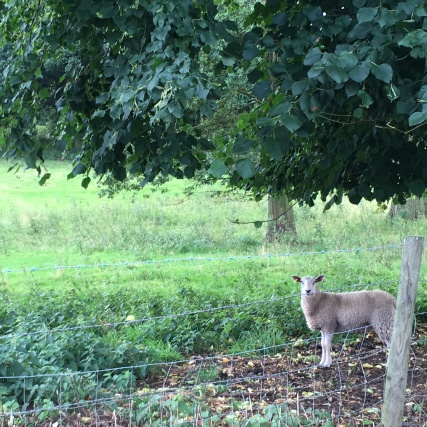 There is a lot of excitement around at the moment over the impending visit of the medal-winning gymnasts, who are currently having some much-needed chill-out time first.